As a generalization of (classical) knots in 3-space, Kauffman introduced in [4]. Since then various studies on virtual knots have been done. For example, relations of virtual knots and Gauss diagrams were studied by Goussarov, Polyak, and Viro in [2]. In their research [2], a kind of local move on virtual knots was introduced, where they call it the . See Figure 1 (left). Then it was shown by Kanenobu [3] and Nelson [8] independently that the forbidden move is an unknotting operation for virtual knots. That is, for any diagram of a virtual knot, there exists a finite sequence of Reidemeister moves, virtual Reidemeister moves and forbidden moves that takes to the trivial knot diagram.

In the studies of forbidden moves in [3], Kanenobu introduced and used several moves for virtual knot diagrams. Two of them, called -move and -move, which are essentially equivalent, played a key role in his arguments. Actually, they were also considered and used by Nelson in [8]. Later, the -move is treated by Crans, Ganzell, and Mellor in [1], where they call it the . See Figure 1 (right). In this paper, we use the notation for the forbidden detour move, which was denoted by in [1].

In this paper, we study this move, and obtain the following.

We note that the -move in [3] (depicted in Figure 2), which is equivalent to the forbidden detour move, can be regarded as a variation of the delta move on (classical) knots, which was introduced by Matveev in [6] and by Murakami and Nakanishi in [7], independently. They showed that the delta move is an unknotting operation for classical knots, but it is known that it is not an unknotting operation for virtual knots. See [10, Theorem 1.6] for example.

In virtue of the theorem above, we can introduce the following notion.

Let be a virtual knot, and denote the affine index polynomial of . Suppose that is expressed as . Then, the following holds.


In the following, our terminology about virtual knot and Gauss diagram follows from those in [1].

Figure 3. The effect of an -move on Gauss diagrams

Let be a virtual knot diagram with real crossings of a virtual knot, and the Gauss diagram associated to . We consider an arrow of , and assume that arrow-heads and arrow-tails exist on one of the arcs, say α, bounded by the endpoints of . Then we can suppose that is smaller than or equal to . 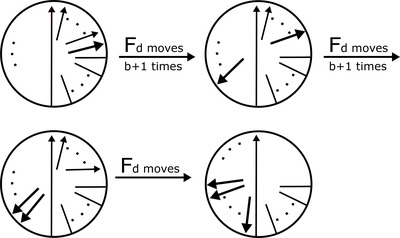 
Let . When with some , we have the following.


Then, since , we get the following.


On the other hand, when with some , we have the following.


Then, since , we have following.

Let and be two virtual knots which can be transformed into each other by a single forbidden move.


holds for some integers and . Here denotes affine index polynomial, which we will define later. By imitating the argument in [9], we have the following.

Let and be two virtual knots which can be transformed into each other by a single forbidden detour move. Then we have


for some integers ℓ and , where denotes affine index polynomial.

To prove this, we recall some definitions about the affine index polynomial used in [9].

First, we define virtual knot invariants by indexes of arrows for a Gauss diagram. Let be a Gauss diagram of a virtual knot , and an arrow oriented from to with sign in . We give the signs to the endpoints and , denoted by and , respectively, such that and .

For an arrow in a Gauss diagram , the of is the arc β in the outer circle with endpoints and oriented from to with respect to the orientation of .

The of is the sum of the signs of all the endpoints of arrows on β other than and , and denoted by .

Then the of a virtual knot is defined as


and, we define the of as


We remark that this is different from the original definition by Kauffman in [5]. However Sakurai showed in [9, Proposition ] that this gives an alternative definition of the affine index polynomial.

Suppose that virtual knots and are represented by Gauss diagrams and respectively, and that is transformed into by a single forbidden detour move. Then there are two cases, Cases (I) and (II) of Figure 5, for the orientations of the arcs in and , where the forbidden detour move is applied. We here only consider Case (I) since the other case can be treated similarly. 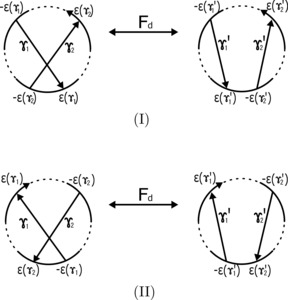 Let and (, 2) be the two arrows of and , respectively, where the forbidden detour move is applied. For arrows and , by Figure 5, we have

Also note that this moves preserves the indexes and the signs of all the other arrows.

Therefore, we obtain the following.


holds for some integers ℓ and .

Then, for each with , by Theorem 3.1, there exist some integers such that


It follows that the coefficients , , , satisfy the the following conditions.


which completes the proof.