The p-deformed Generalized Humbert Polynomials and Their Properties

In 2007, Díaz and Pariguan introduced the one-parameter deformation of the classical gamma function in the form [7]:


where and In fact, the occurrence of the product of the form in the combinatorics of creation and annihilation operators [6, 8] and the perturbative computation of Feynman integrals [5] led them to generalize the gamma function in the above stated form and to generalize the Pochhammer -symbol in the following form:


in which and These generalizations lead to the following elementary properties.


For and Diaz et al. [7] demonstrated that


This may be regarded as the -deformed binomial series. The radius of convergence of this series can be enlarged or diminished by choosing a smaller or larger ; unlike in the classical theory of the radius of convergence of the binomial series which is fixed. This motivated us to study the -deformation of certain Special functions, particularly, the polynomial system formed by generalized Humbert polynomials.

Our objective is to extend generalized Humbert polynomials according to Gould [9] by involving a new parameter: We call this extension a -deformation of the polynomial. We study its properties, namely, the differential equation, generating function relations (GFRs), differential recurrence relations, and mixed relations, and we illustrate the companion matrix.

The companion matrix of the monic polynomial is defined as follows.

Let be a monic polynomial given by . Then the matrix, called the of is denoted and defined as follows [14, p. 39]:

If is nonconstant and then the null matrix.

The class of generalized Humbert polynomials is defined below [9.Eq.5.11, p.707]


where γ, , and are generally unrestricted.

This class of polynomials is generated by the following relation:


The substitution , and in (1.2) result in Humbert polynomials, according to Humbert [11]:


Apart from the polynomials (1.4), according to Humbert [12, p. 75], functions also exits. They have explicit representations in a double infinite series, given by the following:


where and . In recent years, these functions have been increasingly used in various fields, for example, in theoretical physics [3, 13] and communication theory [1, 2, 18]. Moreover, for specific values of parameters and variables, their reduced forms have also been found useful, especially in connection with simplification algorithms in computer algebra systems (see [3]). Therefore, we propose the following extension of the polynomials .


in which the floor function , represents the greatest integer .


For and (1.6) reduces to the -deformed Pincherle polynomial:


The -deformed Gegenbauer polynomial is the special cases where of (1.6) which occurs in the following form:


Further, if then (1.7) is reduced to the -deformed Legendre polynomial given by the following:


All these polynomials reduce to their classical forms when [9, p.697].


has a polynomial solution if and only if and such that mod , where is a root of the recurrence relation, and is the derivative of with respect to for .

Let the sequence be given by , where


to obtain the alternative form:


The differential equation for this explicit form is derived in Theorem 2.1.

Let and . Then, the polynomial satisfies the following equation:


Substituting the equation (2.3) and (2.4) on the left-hand side of the differential equation (2.2) and comparing the corresponding coefficients of , we find that


Because , we have the following:


Hence, the shift operator, in (2.7) becomes the following:


As is a polynomial of degree , the equation (2.8) is a forward difference formula for at the point . Thus, the proof is completed for the choice:

We illustrate special instances of the differential equation (2.2). In particular, the equations of the Pincherle, Gegenbauer, and Legendre polynomials. We choose and to obtain the following:


we obtain the following equation:


The choice yields the differential equation of the Pincherle polynomial according to Humbert [11,p. 23].

Next, to obtain the equation for the -deformed Gegenbauer polynomial, we enter and into (2.2) to obtain


With and the above equation takes the precise form:

To derive (3.1), we take and in the left-hand side of Lagrange's series gives the following:


The same substitution on the right-hand side of the Lagrange's series gives the following:


This completes the proof.

We define the function as follows:


which is required in deriving the following GFR.


where is an arbitrary sequence such that and other parameters are generally unrestricted.

We begin with the following:


In view of the sum in (3.1), the inner series simplifies to the following:


where . If we replace with , then and, consequently, we obtain

The replacement of γ with and the substitutions and

The GFR of the -deformed Humbert polynomials occurs as a special case of (3.4) with the substitutions and given by


The case yields the following GFR:

The GFR of the -deformed Kinney polynomial occurs with and from (3.4) given by


The GFR of the -deformed Pincherle polynomial is obtained by substituting and in (3.4), and it is given by the following:


Replacing with in GFR (3.5) provides the following result:


Comparing the coefficients of , this yields (3.8).

The GFR (3.6) leads to the computation formula of Fibonacci-type polynomials of order stated as Corollary 3.4.

In this section, the differential recurrence relations and mixed relations of the are derived.

First, we denote as and rewrite (3.5) in the following form:


Setting , this results in the following:


The successive differentiation yields the following:


Next, taking the derivative with respect to in (4.1) yields tche following:


Replacing with its series expansion from (4.1), it becomes


where and . Comparing the coefficients of . this yields the following:


From this, it follows that


involving the -Gegenbauer polynomial. This generalizes the familiar formula of Whittaker et al. [20, (III), p. 330](cf. with ). For this further reduces to the following:

For the recurrence relations, we first obtain the following:


Simplifying this and abbreviating by , we obtain


because . The recurrence relation is given as follows:

Taking derivative of (3.5) with respect to , we obtain


After equating the coefficients of on both sides for , we obtain

Let be the monic polynomial obtained from (2.1) and it is defined by the following:


Then, with this assumes the form stated in Definition 1.1. The eigen values of this matrix are thus precisely the zeros of (see [14, p. 39]).

To illustrate the companion matrix of the above monic polynomial, we take and into (5.1) to obtain

Thus, the companion matrix is as follows:


where the eigen values are determined from the following determinant equation:


From this, we obtain the eigen values and that satisfy the equation 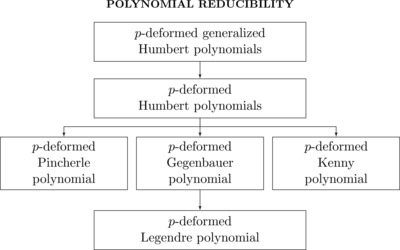 The authors express their sincere thanks to the reviewers and the editor-in-chief for their valuable suggestions for the improvement of the manuscript.